She has forgotten, implied to be 24

She has never measured herself...

She is possessed by the vengeful spirit of a demon she once slew and has forgotten her family, if she even has any

Her weapons, named Raijin-Maru & Fujin-Maru, are twin katanas. She also has two wakizashi swords, though she does not use them. Like all of the bonus characters, Shura's moveset is recycled from one of the main character's; she uses the same moveset as Cervantes.

What lies within her soul is Hate.

Shura has obvious Japanese influences in her design including her weaponry and dragon design on her clothes. She wears a black vest top with black underwear and chaps. These are accompanied by blue arm and leg wraps complete with red sandals. Her long hair is tied into a thin ponytail and she has a fringe covering her face. A prominent feature is the grotesque skull of a demon strapped to her left shoulder.

The woman was simply a killer, one who had never tasted satisfaction. She eventually began to destroy evil spirits to keep things challenging. She slayed many demons, until one day she became possessed by one. But even then, she did not stop killing. She continued her aggressive way of life, until the world was calling her "Shura", meaning "Bloodshed".

The spirit that had possessed her was in search of a powerful body so that it could return from the dead. As for the woman, she simply wanted someone worth killing. Together, they transformed from two strong warriors to a single, even stronger warrior.

The spirit still searches for a perfect body, with the woman still looking for someone strong enough to satisfy her.

Shura defeats Algol, though she and the spirit are disappointed at how weak he is. After destroying Soul Edge and Soul Calibur, they realize that they are surrounded by monsters that were summoned by Soul Edge. They both become excited about the opportunity of finding someone stronger.

The text-only epilogue states this: She left footprints in numerous cities, but none know her end.

Shura can be considered one of the most sadistic and sinister characters in the series. She likes to tease and goad her opponents before she defeats them. Some of her intro quotes reflect this like "Aww...you're so cute." and "I'll teach you a thing or two." She often makes suggestive remarks during combat including "Bad, bad child!" and "I'll tease you all you want!" giving her a somewhat dark and sexually suggestive humor. In addition, her backstory reflects her dark persona, her life focused on satisfying her insatiable appetite for a worthy opponent. Even after she was possessed, her desire to kill still continued.

Overall, Shura is a dark character with a penchant for killing. Her desire for satisfaction leads her to be suggestive and provocative during fights and she is often left unfulfilled with weaker opponents. 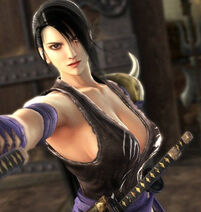 In game screenshot of Shura

In game screenshot of Shura 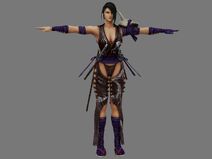 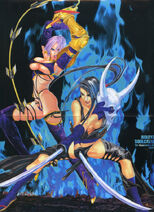 Retrieved from "https://soulcalibur.fandom.com/wiki/Shura?oldid=177432"
Community content is available under CC-BY-SA unless otherwise noted.