"The last threads of sanity unravel in the mind of the man who is no longer human...﻿"
— Narrator

Silk Road Ruin is a stage featured in Soulcalibur and Soulcalibur III, notably used by Hwang and Lizardman.

The south path through the western countries is one of the steepest parts of the Silk Road. Near the entrance on the west side lies an especially eye-catching ruin that serves as a landmark to travelers.

It is said that the building was built by a wealthy merchant during the time when this region was still the centermost route along the Silk Road. In everything from the patterns on the pillars to the decorations on the walls to the materials used in the floors, one can see the mix of Eastern and Western culture typical of a Silk Road ruin.

But now, a dangerous person hides out here... no... this man has long since given up his humanity. For the sake of his objective, he patiently awaits the arrival of travelers who may hold the clues he seeks. 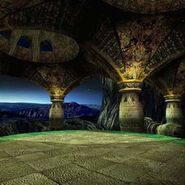 The stage as depicted in the original Soulcalibur.

SC1 Silk Road Ruins (Night)
Add a photo to this gallery
Retrieved from "https://soulcalibur.fandom.com/wiki/Silk_Road_Ruin?oldid=173812"
Community content is available under CC-BY-SA unless otherwise noted.