Soul Edge (Cocoon) is the form Soul Edge took when first wielded by Siegfried, as shown in Soul Edge and Soulcalibur Legends. Before its evil took control of Siegfried and changed him into Nightmare, he used it as his own weapon for a short period of time. In this form, it isn't terribly strong; as it was just recently separated from half of its full mass. It is suggested by a very scarce amount of players that think that this version is the version slowly growing into Soul Edge.

Aside from being Siegfried's ultimate weapon in Soul Edge, this form has made two different cameos. In Soulcalibur II, it was Nightmare's second player outfit's default weapon, and in Soulcalibur III, it appears as one of Nightmare's unlockable weapons. The weapon also gives an increase in defense power and recovers health with each successfully blocked attack. 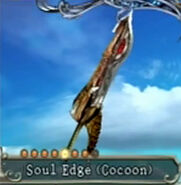 Siegfried, as Nightmare, wielding the cocoon Soul Edge in Soulcalibur II
Add a photo to this gallery
Retrieved from "https://soulcalibur.fandom.com/wiki/Soul_Edge_(Cocoon)?oldid=176408"
Community content is available under CC-BY-SA unless otherwise noted.