Soul Edge (Phantom) is the weapon Nightmare wields in Soulcalibur III, which is formed by Nightmare when Zasalamel gives him power again. It is a materialization of Nightmare's memories of the original Soul Edge, created from his own body. It has the ability to consume souls, but other than that, it is just a weaker version of the true part of Soul Edge itself. It is created in a similar way to how Charade and Inferno create their own weapons from their bodies. 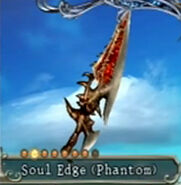 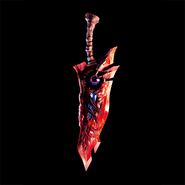