For the weapon, see Soul Edge.

Soul Edge (ソウルエッジ, Souru Ejji?) is the first installment in the Soul series fighting games developed and published by Namco. It was initially released in the arcades in 1995. A few months later, Namco released a fixed version labeled Soul Edge Ver. II, upon the complaints of players who found the difficulty quite high and the last boss "unbeatable". Hwang Seong-gyeong (initially a palette swap of Heishiro Mitsurugi for the Korean version of the game) was introduced to Japanese players with a new movelist, Cervantes de Leon became selectable, Guard Impacts and Air Combos were implemented, and all the characters received upgraded movelists. The game was then ported to the Sony Playstation and renamed Soul Blade in Europe, North America, and Australia to avoid potential complications with Edge Games. Soul Edge has been largely overshadowed by its sequel, Soulcalibur, which has been the moniker of the series since 1998.

Soul Edge is the name of the demonic sword which the story revolves around.

Soul Edge was the second entirely weapons-based 3D fighter in history, following Battle Arena Toshinden by two years. Apart from the aesthetic benefits, giving the characters weapons allows for a greater diversity between them, meaning there is someone for every play style. One excellent concept of weapon-based combat implemented by Namco is the major factor that range has in gameplay. The slower, longer ranged characters try to deliver their heavy blows from a distance whereas the quicker, faster characters try to get in as close as possible and deliver quick-hitting attacks. All characters have moves that work at varying ranges though, so longer ranged characters can also hit surprisingly quickly and lesser ranged characters will get in the opponent's face within the blink of an eye if the enemy is careless.

One of the series' main attractions was that it was one of the first fighting games to feature detailed accounts of the individual fighters' motivations and common relations in their quest to achieve a common goal for varying purposes. Many players appreciate Namco's ability to introduce new characters to the series with interconnected storylines such that every character is linked to another somehow, with connections growing larger as the series progresses and the characters accomplish new tasks in the events of the story.

Soul Edge was created prior to the introduction of the "8-Way Run", which allowed the player to move their character in a complete range on the Y-axis. The characters can sidestep on either side by double-tapping up or down. The jump maneuver moves the player higher into the air, even allowing it to pass above the opponent. One of the most notable gameplay aspects is the "Weapon Gauge". This bar was found under the character's lifebar and was comparable to the equipped weapons' resistance. Each time the player blocked an attack, the bar would deplete. If the bar was totally emptied, the character would lose his/her weapon and be forced to end the match unarmed. Though this is an original idea, unfortunately the unarmed move-lists are the same for every character. Another feature that was removed from Soulcalibur's engine is when two character strike at the same time, "locking" their weapons. In those situations, those who pressed the right button would have the advantage. This aspect behaves similarly to rock-paper-scissors.

Character moves retain a feel of Namco's Tekken series. Each character has in his or her arsenal one or two unblock attacks, balanced however because of its slow execution. Also, each character is capable of performing one or two Critical Edge attacks, which consisted of a long series of linked hits, which usually ended in a strong high attack. These moves require the input of a special combination of two parts: they're activated by pressing "A+B+K" together, and if it connects, the player has the chance of extending the combo with a character-only sequence, which must be input during the attack. This attack depletes 1/3 of the Weapon Gauge when used.

To achieve a ring out, the player must be knocked outside the ring by an enemy; though the player can accidentally ring out his/her own character.

Soul Edge's story tells the tale of warriors searching for the ultimate sword, "Soul Edge". It has been given many names throughout the story, such as "The Sword of Salvation", "The Sword of Heroes", and "The Ultimate Sword" among others. Many strong warriors searched for years, but very few actually found it. The sword, now in the form of a twin pair of long swords, appeared mysteriously in an auction. They were taken by the dreaded Captain Cervantes. Nothing was known of his fate thereafter...

Now, nine warriors from around the world search for the sword for different reasons. Some for power, others for revenge; some believing it's a benevolent sword, searching for its support; while others knowing of its evil nature, seeking its destruction. Nothing is known for certain about the sword, except for one thing: it brings misfortune to those seeking it.

Soul Edge introduced many characters still familiar to players today, especially the series' main character – who serves as both a protagonist and an antagonist throughout the series' history – Siegfried Schtauffen; as well as its token samurai and ninja, Heishiro Mitsurugi and Taki, respectively. The total of characters on the games is of fifteen selectable characters: eight in the original arcade release, ten in the fixed arcade version, and fifteen in the home version:

Characters only playable via cheat device

Basically all character models that appear in the game, namely in the ending sequences, are playable via cheat device. They are sometimes falsely considered unfinished characters, implying that they were originally planned to be fully playable main characters but were left unfinished. The characters found in the game code of the home version are[2]:

On December 20, 1996, Soul Edge was ported to the Sony PlayStation for the Japanese market and versions labeled Soul Blade came out in 1997 in the USA and Europe. The port kept the Soul Edge Ver. II roster of ten and added five unlockable characters, including SoulEdge, the final boss of the game. 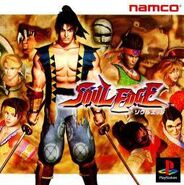 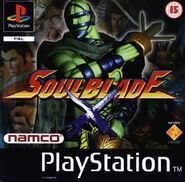 The European boxart for Soul Edge (Released as Soul Blade)

Keyart for the Arcade release 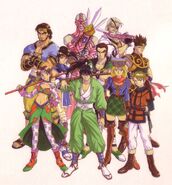 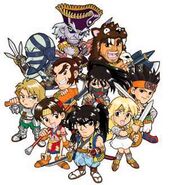