Soulcalibur (ソウルキャリバー, Sourukyaribā?) is the second game in the Soul series of fighting games developed and produced by Namco. Soulcalibur was ported to and released for the Sega Dreamcast in 1999 with improved graphics and new features, and became one of the best-selling Dreamcast titles of all time. The Sega Dreamcast port is often cited as one of the greatest fighting games of all time, and even one of the greatest games across all genres; it is ranked as the fifth-best game of all-time by review aggregator site Game Rankings.[1] Following the first game Soul Edge in 1995, the Soul series received a major makeover and was retitled Soulcalibur in 1998. Hence, Soulcalibur can also refer to the series consisting of Soulcalibur and its subsequent sequels.

Soul Calibur is the name of the holy sword, created to battle the evil sword Soul Edge, around which the games' story-lines revolve. According to a timeline released by Namco on their "Soul Archive" site, Soulcalibur takes place around 1586.

Soul Edge/Soul Blade had a strong fanbase, but when Soulcalibur was released in the arcades, it was not as popular at the arcades as Namco would have liked or expected. Luckily for the series, Soulcalibur was picked up for the Sega Dreamcast, and became a smash hit almost overnight. Soulcalibur, the second game in the series, not the first, was set 3 years after the original and introduced a revolutionary feature, the Eight-Way Run. Previous 3D fighters had only limited movement along the third axis, with sidesteps and rolls providing useful but unsustained lateral movement. In Soulcalibur, simply holding down a joystick direction causes the character to run in that direction. This gives the player a sense of freedom and deepens the strategy of the game. Soulcalibur also improved game play with "forgiving buffering." Buffering is executing the input for one move before your character has finished recovering from their previous move. It is important for executing quick strings of moves. Tekken and Virtua Fighter have relatively strict buffering requirements, meaning expert timing is required to pull off many combinations, while Soulcalibur's relatively lenient buffering lets players focus more on the game and less on the controls.

The mystical sword of the legends, the "Soul Edge", ended in the hands of the dread pirate Cervantes of Spain. For the next 25 years he stayed dormant on the remnants of the port town in Valencia, Spain, taking the souls of those who reached him during their search of the sword. His reign of terror was soon to start, but the joined efforts of a divine warrior (Sophitia) and an underground ninja (Taki) stopped him, breaking one of the twin Soul Edge blades in the process. As it was about to tear itself apart, a young knight (Siegfried) approached the port town. The moment he took the hilt of the cursed blade, Soul Edge released a bright column of light into the sky. This was known as the "Evil Seed", bound to bring calamity and death across its path.

Three years after those events, Soul Edge uses Siegfried as its host, and now Siegfried is Nightmare, a knight wearing azure armor. Europe plunges into a vortex of slaughters as he and his followers claim souls to strengthen the blade in its weakened state. Unknown to them, a group of young warriors met on their journey to stop Soul Edge, and with them three sacred weapons join once again.

Soulcalibur was originally planned to be a dramatic overhaul, featuring only a few select characters to be carried over from its predecessor, Soul Edge. While the initial plan did not exactly follow through – as nine of the eleven characters from the original roster had carried over by the time the game was ported to the Sega Dreamcast – the game still did manage to nearly double the size of the roster from the previous title. Most of these characters were readily available from the second the player opens the package. Characters in bold must be unlocked.

Although the game added nine new characters, eight of the newcomers were, for the most part, updated versions of previously-existing fighters. Of the three main protagonists, Kilik's move set was largely taken from Seong Mi-na, and Maxi was a greatly updated version of Li Long from Soul Edge; and of three of the main antagonists, Nightmare's move set was understandably taken from Siegfried (who is actually the same person), Astaroth's from Rock; and Lizardman was based primarily on Soul Edge's featured heroine, Sophitia. In the Korean version of the game, Mitsurugi was replaced by a Caucasian swordsman named Arthur because the image of the samurai was not very popular with Koreans. Added to that is the fact that both Edge Master switches his styles to match randomly-chosen existing characters' move lists with each individual round of fighting. In fact, Soulcalibur only added three truly original playing styles, shown in Ivy, Yoshimitsu, and Xianghua (and even Yoshimitsu and Xianghua had some moves borrowed from established characters Mitsurugi and Hwang respectively). Additionally, Taki has experienced a change of her own now that she wields dual tantō instead of one. Consequently, Namco has been working hard since Soulcalibur to gradually differentiate the roster's styles until the series features completely original styles for each of its characters.

Soulcalibur was released in Japan for the Dreamcast in August 5, 1999; and in North America as a launch title in September 9, 1999.

The Dreamcast version of Soulcalibur is often cited as an example of a home conversion of a game being vastly superior to the original. Among the differences were improved visuals, tweaked gameplay, new game modes, new costumes, and the inclusion of an extra character, Cervantes de Leon.

The Dreamcast version features new modes such as the Team Battle, Survival and the Training Mode. In Mission Battle Mode, the player completes various missions to attain points, which can be used to buy various art and costumes. Another feature added is the artwork section, containing both official artwork, fanart, and high-resolution pictures. Also unlockable are "liquid metal" versions of the characters' costumes and a "Battle Theater" mode.

On July 2, 2008, Namco Bandai released a version of Soulcalibur for Microsoft's Xbox 360 via the Xbox Live Arcade service. While the port contained all characters from the Dreamcast edition, and the majority of its game modes, it lacked the Mission Battle Mode; the mode was cut from the final version due to Microsoft's original limit of Arcade games being only 150 MB in size. Because the mode was cut, all bonus costumes, bonus characters, and Museum content are unlocked from the start.

On January 19th, 2012, Namco Bandai released a port of Soulcalibur for iOS devices in Japan. The port is based on the Xbox Live Arcade release, and as such, lacks the Dreamcast version's Mission Battle Mode. This port is no longer available.

The Dreamcast port became wildly successful, with over 1 million copies sold.[2] Critics also consider it one of the greatest games of all time, receiving perfect 10 scores from GameSpot[3] and IGN,[4] and also a perfect 40/40 (second of only eight games) by Japanese gaming magazine Famitsu.

Soulcalibur won the 1999 E3 Game Critics Awards for Best Fighting Game. Soulcalibur was listed as the 43rd greatest game of all time on IGN's 2005 top 100 list [5] and voted the sixth greatest game in the 2006 readers' picks version.[6] Game Informer listed it as the top game on their top 10 Dreamcast games list.[7]. It is also currently listed as the sixth greatest game of all time on the video-game-dedicated review aggregating site, GameRankings.[8] 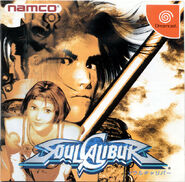 The front Japanese boxart for Soulcalibur

The back Japanese boxart for Soulcalibur 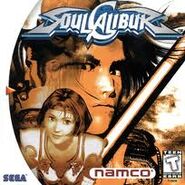 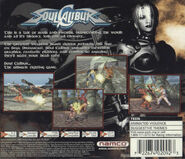 The back North American boxart for Soulcalibur 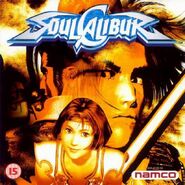 The front European boxart for Soulcalibur 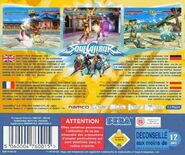 The back European boxart for Soulcalibur

The characters of Soulcalibur 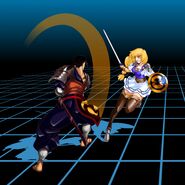 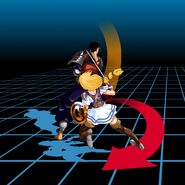 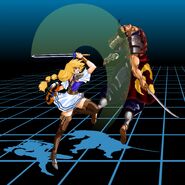