Soulcalibur III (ソウルキャリバーIII, Souru Kyaribā Surī?) is the sequel to Soulcalibur II and is the fourth overall installment in the Soul series of fighting games. It was released exclusively for the PlayStation 2, unlike its predecessor Soulcalibur II, which was also released for both the Nintendo GameCube and the Xbox, with a single different guest character featuring in each version.

Soul Calibur is the name of the holy sword, created to battle the evil sword Soul Edge, around which the game's story-lines revolve. It is the second part of 1590 A.D. Trilogy storyline.

The game includes new modes such as Tales of Souls, an interactive story-driven mode comparable to Soul Edge's Edge Master Mode; Create-A-Soul Mode, in which players can create custom characters from thirteen total occupations, with multiple weapons and fighting styles; and Chronicles of the Sword, a real-time-play mode that allows players to take their created souls through adventures of their own. The game also has the largest character roster – 24 characters playable in Tales of Souls mode and an additional 18 playable in all other modes – and largest battle stage selection in the Soul series history.

Although recent generations of fighting games have supported online play, Soulcalibur III does not. The game's producer, Hiroaki Yotoriyama, has said that, "At the current time, the online infrastructure is extremely different between countries, and there's people that can not enjoy network gaming. We've decided to concentrate on improving the game's offline content and its characters so that people all over the world will be able to have fun."[1]

Features in Soulcalibur III include:

Create-A-Soul allows players to construct their very own characters by donning them with an assortment of clothing parts such as armor or robes. The player may also change the character's hairstyle color, eye color, skin color and facial features, ranging from young to old as well as voices. As the player completes tasks through the game, more parts can be unlocked for availability. Depending on the parts chosen, the character's alignment (good or evil) and personality (loud and brash or quiet and reserved) will change, which influences their dialogue in battle as well as their Destined Battle in Quick Play. Character construction first starts with the creation's gender, followed by their fighting style and weapon. At the start, only three are available, though seven more can be unlocked as well. 9 of the styles also contain Soul styles, which allows the character to use the same weapons and fighting style as the playable characters, save for Olcadan and Abyss. The Swordmaster style allows the creation to select all but the Soul styles.

Choose one of the characters and lead them on a journey around the world, searching the Soul Edge. The player is given the option to choose what path the character takes, and depending on the choices made, and whether the player has lost a match, either Abyss or Night Terror will be fought as the final boss. There are also optional battles entitled 'Prepare to Defend Yourself' in which either a bonus character or unplayable character is faced; these battles may not be retried if lost, but the story progresses regardless.

Chronicles of the Sword

A separate storyline from the main Soul series. Players create a protagonist through the Create-A-Soul feature and goes through a series of battles in the vein of strategy RPGs such as the Fire Emblem series, with battles being resolved as traditional Soulcalibur-style matches. The characters can level up, which increases their effectiveness in these battles.

Play against various pre-rendered opponents from around the world, similar to Tekken 5's Arcade Mode

Most Extra Weapons make a return from Soulcalibur II. In this installment, however, the number of extra weapons is reduced to 8 different weapons, including the two defaults for 1P and 2P, the Ultimate Weapon, Joke Weapon, and The Ancient. The system is once again changed, this time based solely on abilities; normally 2 per weapon, 4 per Ultimate, and 3 occasionally. Icons are displayed telling every effect in detail for each weapon.

There are no third character costumes presented in this installment, but to compensate there's a Color Edit mode, where the player can edit the colors out of 3, or in some cases 4, sections of a character's costume and make their own personal version of it. The parts that can be changed range from clothing to skin to hair color.

Nearly all characters who have been featured in a Soul series title in the past return, except for Inferno, Necrid, Seong Han-myeong, Edge Master, and the console-exclusive guest characters Heihachi, Link, and Spawn. Soulcalibur II's mimic character Charade does return, but only as an non-playable enemy character appearing on certain paths for some characters' Tales of Souls. Other unlockable characters include personnel in the Chronicles of the Sword quest, opponents from the Tales of Souls mode, and the weapon, armor, and item shop owners. Characters in bold are unlockable. The styles of all playable characters except for Olcadan and Abyss can be used in custom characters; the classes that can use these styles are listed below.

Custom Disciplines are available to custom characters. They tend to be plainer than disciplines of main characters, mostly not involving taunts and side throws. Several weapon designs of disciplines are based upon characters that use similar weapons, usually unused weapons from Soulcalibur II. Each class also has a character representing the class. These characters must be unlocked, either by playing through Tales of Souls and Chronicles of the Sword, or by playing a certain number of matches.

A custom character with the Swordmaster job can use any of these disciplines.

Throughout the Tales of Souls story mode, the player will come across certain characters after a battle when the character feels like he/she is "being watched". If choosing Stop, they will fight either a bonus character (which can be unlocked after winning) or an unplayable character. Some characters can be created through Create-A-Soul such as Assassin while others like Charade cannot. New characters are marked as bold.

Variable Cancel was a glitch present only in the console version of Soulcalibur III, it allowed the ability to cancel various animations (including attack and recovery animations) into a neutral position allowing the player to do any move they wish. This glitch is largely the main reason why the community deemed the console version to be noncompetitive. The glitch is performed by inputting Guard down down or G22 during certain moves such as Throw animations and Attacks. What made this glitch an issue was it allowed the ability to cancel the start of a throw animation which would allow you to perform a second throw immediately before a throw break is possible[2], the ability to cancel the middle or end of a throw animation which creates combos that are not possible under normal circumstances[3], and most notability the recovery animations on certain moves such as Guard Impact which would create situations that allowed a free hit on the opponent if they landed a successful Guard Impact on one of your attacks.[4] Variable Cancel being very easy to input combined with creating situations that punishes players for landing successful Guard Impacts and allowing very strong combos that should be impossible are the main reasons why this game did not get adopted by the competitive community, many of them sticking to Soulcalibur II instead.

"Soulcalibur III: Arcade Edition is a re-tuned, re-vamped, and, most importantly, fixed version of Soulcalibur III. Naturally, all glitches found in the console version have been fixed. In addition to that we've re-tuned the overall balance of many moves and re-vamped Amy, Hwang and Li Long as official characters. All three have been revised into more unique move sets and help to expand the already expansive Soulcalibur III line-up." ----WCMaxi (Namco Producer)

All of the characters return except for Abyss who is an unplayable boss with Night Terror, Inferno returns as an unplayable sub-boss and finally Amy, Hwang and Li Long are regular characters and have new 2nd costumes. The game has three different modes. Training Mode, Standard Mode and Legend Mode.

In training mode the player chooses a character and trains with the character's moves for 300 seconds (5 minutes).

In standard, the player chooses a character and fights through 9 battles without being interrupted by cutscenes or movies.

The player chooses a character and chooses a legend character (which is not the chosen character) and fights it. The player fights to level up and starts on Level 1 and the maximum level is Level 999.

Soulcalibur III is part of the Universal Fighting System Collectible Card Game, created by Sabertooth Games and now published by Fantasy Flight Games. It was one of the official founding franchises of the card game, alongside Street Fighter, when the game was released April 2006. UFS has seen 5 expansions based on Soulcalibur III's characters and history.

The back North American boxart for Soulcalibur III

The back European boxart for Soulcalibur III 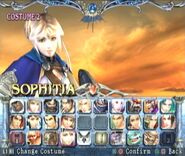