Main article: Character Creation
Character Creation from Soulcalibur III returns in Soulcalibur IV. Instead of including some original weapon styles for use with certain classes of fighters, Soulcalibur IV now only allows players to simply choose which character from the series they would like to have their created character mimic (excluding Algol, bonus characters, and the Star Wars guest characters). This differs from Soulcalibur III in that many different styles were also included, such as Grieve Edge, Kunai/Shuriken, Wave Sword, or Tambourine. The styles were removed in the transition, and the character creation has been simplified.

A wide array of new pieces of equipment are available for use in Soulcalibur IV's Character Creation mode, and new options include a wider range of character voices (now with pitch adjustment) and the ability to change a character's general physique and muscularity.

Multi-fighter battles in Soulcalibur IV use a different structure from its predecessors, nicknamed Active Matching Battle (AMB). The AMB system allows players to switch to other members of a 'party' of fighters with the push of a button. Also, instead of starting a new round for each opponent defeated, new opponents will simply run into the battle immediately after a K.O. - with the exception of certain combatants, these certain combatants usually being the 'end-of-the-level-boss' of each round or level. Matches utilizing the AMB system only appear in the Story and Tower of Lost Souls modes.

Main articles: Soul Gauge and Critical Finish
Soulcalibur IV features an all-new Critical Finish system. Next to a player's HP Gauge is a colored gem that represents the "Soul Gauge". The gem changes color when the player guards and is attacked. The color gradually changes from green to blue and or to red and then flashing red when the Soul Gauge is empty. The player's own Soul Gauge will regenerate if he or she makes an attack and hits the opponent (guarding or otherwise). If the character manages to empty out the opponent's Soul Gauge, he or she will get a short chance to perform a powerful Critical Finish move, which will defeat the opponent instantly, by pressing all four face buttons at the same time.  However, the Critical Finish feature was met with some negative responses.

The Star Wars guest characters, Darth Vader, Yoda and The Apprentice, utilize unique attacks using the Force. Darth Vader is able to utilize Force-based pushes and chokes, Yoda can use the Force to launch himself into the air for complex aerial attacks, and The Apprentice is able to use Force lightning and other dark-side moves. These moves drain a special Force Gauge, which recharges gradually when not in use.

For the first time in the series, Soulcalibur IV has the option to fight against other players online. Players can play ranked matches or unranked matches which is called players matches. Modes available online include "Standard VS" where players fight without using skills and "Special VS" where players fight with skills enabled. Created characters are playable in the online multiplayer mode.

The characters that must be somehow unlocked appear as bold.

Characters are listed in alphabetical order. Characters in bold can be unlocked by purchasing them in Character Creation for 4,000 Gold each.

All bonus characters share a move list with a regular character and must be defeated in Story Mode in order to be unlocked, exact Story Modes are stated below.

Servants and Illusions of Zasalamel

Only some of the minor characters are playable, and strictly in Story Mode. However, most can be made from custom character parts.

Many movesets have been modified and/or simplified. Nearly all characters' moves have been slightly changed, yet the most obvious modifications are: Ivy, Yun-Seong, and Mitsurugi.

The Premium Edition of Soulcalibur IV includes a 48-page softcover art/comic book illustrated in full color, an XL 100% cotton t-shirt, and a tournament chart that allows "fans the opportunity to document the battle amongst friends." This chart is also a poster on the reverse side. It comes in a metal case and was released on the same date as the regular edition. The Premium Edition also has the best weapons and joke weapons already available for purchase, as well as clothing items to create a schoolboy or schoolgirl character. In New Zealand, the United Kingdom, and Australia, there will be a steel bookcase edition instead, with bonus DVD containing 4 trailers in HD, 4 wallpapers, exclusive concept art and an exclusive booklet with character biographies.

Shortly after the initial release, various downloadable content was made available. However as of late-2016, it is unknown why the DLCs are suddenly removed from the online store.

There were certain criticisms directed towards the guest characters from the Star Wars franchise, with several critics maintaining that their presence was "unnatural" and that Yoda and The Apprentice in particular were "broken" and "absurd", respectively. Also, programming on the Star Wars characters containing such detail that the characters abilities are "unnatural" and "unfair" to the player when playing the Arcade or Story modes.

There has also been some criticism towards the online multiplayer mode on both the Xbox 360 and PlayStation 3 versions of the game. Due to poor network programming, the "auto-matching" feature will often attempt to connect players to an already full or in progress match thus giving the player the error "Match is Full". The best fix for most is to host a match of their own, in which an opponent will typically join within a minute. 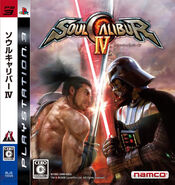 Character Selection Screenshot for the Xbox 360 version. Lizardman, Sophitia, Amy, Setsuka, Mi-na, Rock, and Algol have yet to be used; the five bonus characters occupy the slot with the star, and The Apprentice will occupy the remaining empty slot upon being unlocked; Vader and Yoda switch spots for the PS3 version.