View source
watch 02:56
Raise a Floppa - The Loop
Do you like this video?
Play Sound

Soulcalibur V had been teased about since late 2010 when Daishi Odashima, the game director, tweeted that "SC is back!". The game was officially announced May 11, 2011 at their Level Up Press Conference in Dubai. The character roster consists of 28 characters, half of which could be considered new characters. The game allows the characters to fight in more than 20 stages. Project Soul released the game on January 31, 2012 in the US and February 2nd, 2012 in Japan and Europe.

The development of the story mode was done alongside CyberConnect2, the developer who made the .hack series, as well as the Naruto: Ultimate Ninja series.

Digital editions of the game were released on April 23, 2013. In Europe, Middle East, Africa, and Australia, a "Legendary Edition" was also released, including Dampierre and every downloadable costumes and armors from the Cepheus Store.

The game takes place during the 17th century, 17 years after the events of Soulcalibur IV, with Nightmare's death by the hands of Siegfried. The main protagonist is Patroklos and the deuteragonist is Pyrrha, son and daughter of Sophitia and Rothion Alexander and nephew and niece of Cassandra Alexandra.

The plot consists of 20 chapters in Story mode.

It begins with the final confrontation between Siegfried and Nightmare in which Siegfried kills Nightmare.

Seventeen years later, Patroklos Alexander is seen fighting a group of villagers he considers being malfested. Without hesitation, he kills several of them until he is confronted and defeated by a mysterious stranger named Z.W.E.I.. Patroklos returns to Graf Dumas for his report and after he questions his master, he is shunned by him and forced to fight Voldo.

At the same time, Pyrrha is seen kneeling in front of several dead people, crying. She is joined by a satisfied Tira who compliments her on these killings.  Forced to fight other villagers, she reluctantly kills them before she is informed by Tira that she has a brother.

Later, after meeting with Siegfried and being granted to wield Soul Calibur, Patroklos, accompanied by Z.W.E.I. and Viola, sets on finding his sister and the malfested who kidnapped her. After fighting Tira twice, Patroklos is finally reunited with his long lost sister. During their travels, in which Pyrrha shows some symptoms of malfestation, they are attacked by Astaroth and later by Voldo. During the battle with Astaroth, Patroklos is injured and Pyrrha is forced to fight Voldo. Later they meet Ivy who tends to Patroklos' wounds.

They arrive in a city where malfested are wreaking havoc. Graf Dumas is revealed to be a reincarnated Nightmare who used Patroklos, tricking him to think he was killing malfested while in fact, he killed innocent human beings. Incapacitated due to his wounds, Patroklos is unable to fight his former master and once again, Pyrrha has to step forward and fight. She turns into a malfested and defeats Nightmare. A shocked Patroklos rejects her and runs away, while Tira reunites with Pyrrha, telling her she was right. Pyrrha acknowledges that Tira is the only person she can ever trust.

Patroklos returns to Seigfried where he tells Z.W.E.I. of Dumas' real identity. Left alone, Patroklos has a vision of an angelic entity looking exactly like his late mother Sophitia. She tells him that he must revive Soul Calibur in order to cure Pyrrha of her malfestation. Forced to fight Z.W.E.I., Patroklos comes to realize his true destiny.   He sets out on a journey to resurrect Soul Calibur, seeking the help of Ivy. She informs him that she came across a man named Kilik who had one of the artifacts necessary for the process, while the other one was detained by a women. Patroklos comes across three teenagers: Natsu, Leixia and Xiba who travel with Maxi. To prove his worth, Patroklos is forced to face them all.

After resurrecting Soul Calibur, Patroklos faces his malfested sister who was now the new host of Soul Edge. She had been wreaking havoc all around her. After he kills her and encases her into crystal, the entity, Elysium pretending to be his mother, Sophitia appears in front of him and congratulates him.

While this occurs, Siegfried and Z.W.E.I., along with Schwarzwind, fight the army of the malfested.  Z.W.E.I. fights and defeats Nightmare, but he is stabbed in the back by Pyrrha and falls into the abyss, his fate left unknown. Pyrrha seizes Soul Edge for herself and opens a rift to the Astral Chaos.

Meanwhile, Patroklos questions his acts and he is confronted by Edge Master. Patroklos is brought back in the moments where he resurrected Soul Calibur, then confronts his sister again. Refusing to kill her, Patroklos is punished by Elysium who encases him in crystal.

Pyrrha regains her spirits and seeing her brother in crystal. She then took up Soul Edge and was able to overcome its will and she tries to break him free by chipping away the crystal.

In what appears to be another plane of existence of Patroklos' conscience, the entity, named Elysium, reveals herself to be the incarnation of Soul Calibur, tells him that she will use him to destroy the malfested in order to bring peace to the world. Breaking free of his crystal prison and realizing that it was never his mother guiding him, he fights and defeats her, then says goodbye to his "mother".

Waking up, Patroklos is once again reunited with his sister. Despite her being malfested, he is ready to accept her the way she is, just like their mother would have, and together, they banish both soul swords in the Astral Chaos and close the rift.

Pyrrha and Patroklos then depart together in the sunset.

There are 27 stages, one per character (except Dampierre sharing with Patroklos and Devil Jin sharing with Ezio Auditore), where the player has the choice to play either of the characters' music theme or the stages' background music (Ex: Pyrrha’s theme, Colisseum’s theme…). In addition, some stages are multi-tiered and make a transition to new areas under certain conditions. Multi-tiered stages are marked with *:

According to an interview from Train2Game, Daishi stated that there will be "tons of pieces" to download, starting from April 3, 2012 and new packs being released every four weeks. 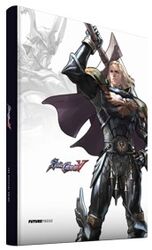 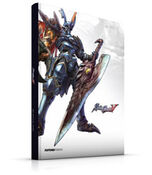 Soulcalibur V: The Official Guide by FuturePress (back cover)

Shrine of the Snake God Palgea

Cavern of Light and Darkness

Patroklos "Heir To The Title of Holy Warrior"

Pyrrha "She Who Fights Destiny"

Ivy "The Return of a Legend"

Hilde "She Who Vows to Rebuild Her Homeland"

Maxi "His Past Has No Bearing"

Voldo "He Who Is Bound By Blind Allegiance"

Leixia "A Young Lady Longing for an Adventure"

Nightmare "The Symbol of Destruction"

Raphael "Wandering For His Lost Love"

Yoshimitsu "He Who Lives by the Code"

Algol "The Hero of Ancient Times" 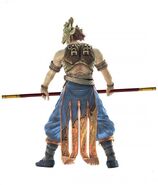