Start a Wiki
watch 02:35
The Loop (Games)
Do you like this video?
Spoiler warning: Plot or ending details follow.

New story mode where young protagonist Patroklos goes on a quest to eliminate the malfested from the world, searching for his older sister, Pyrrha, facing several problems during his journey. He meets new people, like Z.W.E.I., Siegfried, Viola, Ivy and others, and new enemies, such as Tira and his own master, Graf Dumas.

1590 A.D. The war between the cursed sword Soul Edge and the spirit sword Soul Calibur began with the massive offensive by the Wolfkrone Kingdom. Soul Edge, which resided at the remains of the Ostrheinsburg Castle devouring human souls, lost in the fight and all came to an end for a period of time.

1607 A.D. A young blond man stood in a town in Europe engulfed in the flames of rebelion. The young man, Patroklos Alexandra, inherited his sword skills from his mother who was hailed as the Holy Warrior.

Patroklos headed for Klausenberg and destroyed any that looked like malfested in order to lure the malfested with the ring blade who had destroyed his family. Several days later a stranger stood before him.

What happened in Klausenberg brought doubt in Patroklos' mind. He did not believe the man who demigrated his lord, but he headed to the hideout to find out the truth from Graf Dumas.

Patroklos relied on Graf Dumas to provide him with the clues to find his sister, Pyrrha. However, the graf's true intent enraged Patroklos and he struck his sword against the graf. Now he no longer has any place to go and headed to town.

Opponent: Siegfried (3 out of 5 Battles)

Citizens fled from the burning town located in northeast Bavaria. A lone girl silently sat among the townspeople running away from the fires and the chaos. Her eyes were filled with remorse and sadness, her sword drenched in her victim's blood.

After leaving the town, Tira found but that the mercenary group, Schwarzwind, and the minions of Nightmare were fighting in a nearby field. A battlefield was the ideal place to train her worked into a killer. Tira smiled and ordered Pyrrha to kill the humans in a place whort dead roughs.

Patroklos received information on the malfested with the ring blade from Siegfried, the former wielder of Soul Calibur. Z.W.E.I. and Viola joined on his journey to find his foe. The spirit sword glowed silently in Patroklos's hand.

Finally meeting his sworn enemy, his anger overwhelmed Patroklos. Tira acted as if she lost to the spirit sword and lured Patroklos away. Tira ran through the moonlit night and grinned that all is going as planned.

Tira smiled and easily let go of Pyrrha. Now that Pyrrha had been saved from Tira. Patroklos only wish was to go home with his sister. Pyrrha agreed to go with him since.

Opponent: Astaroth (3 out of 5 Battles)

Pyrrha learned for the first time what family meant as she tried to forget her painful past. Her brother was happy that his wish had now been fulfilled. The siblings did not realize that they were being watched from afar.

Once they board the ship from the eastern side of the peninsula to traverse the Mediterranean, they will soon be back in Athens, their homeland. The two headed to the port city, but there they found the once peaceful city engulfed in flames.

Opponent: Nightmare (3 out of 5 Battles)

Pyrrha's body slowly malfested as she cut down people and witnessed their blood. Patroklos feared what Pyrrha had become and ran from the port city, wandering Europe as if in a trance. Eventually he found himself in front of the citadel where Siegfried resides.

Opponent: Patroklos (3 out of 5 Battles)

Should he fight against Pyrrha, who has now malfested? The conflicting question haunted Patroklos. Soul Calibur changed its shape as if to lead him to the "right" path. The sword is said to test the will of its wielder. Patroklos decided that he will answer with the sword skills that he had been taught in the past.

Patroklos continued his journey in search of Kali-Yuga and Dvapara-Yuga which were needed to resurrect Soul Calibur. However, it proved difficult to find clues about the Asian treasures with mysterious powers. After much wandering, Patroklos ended up in the city of Dijon.

Patroklos won the trust of the Asian fighters with his sword skills. They all decided to travel to Prague where Ivy waited. In order to resurrect Soul Calibur, Patroklos entrusted all to Ivy.

Pyrrha's final words resonated with Patroklos' heart. He is filled with regret.

- I want to return, to the world before I made my mistake.

Each with their own wish to stop Soul Edge, people arrived in Hungary where the cursed sword awaited. Z.W.E.I. looked forward to facing his hated foe, Nightmare. His revenge was about to take place.

As if to recreate the events of seventeen years ago. Pyrrha raised Soul Edge high and split the heavens. The gate to Astral Chaos appeared over the battlefield. Patroklos was unable to stop the beginning of the end.

Soul Calibur was born to stop the powers of Soul Edge. In exchange for its great power, the chosen wielder of the spirit sword is destined to kill the wielder of Soul Edge. When one fights this destiny, what will history choose?

Opponent: Elysium (3 out of 5 Battles)

Stage: Utopia of the Blessed

Because of the deadlines, Soulcalibur V's story mode was reduced to a quarter of its original planned duration. Therefore, many questions left unanswered:

Patroklos and Zwei in Story Mode

Tira and Pyrrha in Story Mode 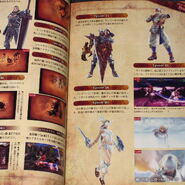 Story Scans
Add a photo to this gallery
Retrieved from "https://soulcalibur.fandom.com/wiki/Story_%7E1607_A.D.%7E?oldid=173661"
Community content is available under CC-BY-SA unless otherwise noted.