View source
watch 01:54
Arcane: League of Legends - The Loop
Do you like this video?
Play Sound

Self Taught
Form V: Shien, Dark Side of the Force

"I will eliminate you."
— The Apprentice

The Apprentice (アプレンティス Apurentisu) (also known as Starkiller, real name Galen Marek) is a Sith Warrior, the secret apprentice to Sith Lord Darth Vader. He appears as a guest character from the Star Wars Series and appears on both home versions of Soulcalibur IV, along with the console exclusive turned opposite console DLC characters: his Master, Vader, and Jedi Grand Master Yoda. The Apprentice is the main character of the Star Wars video game, Star Wars: The Force Unleashed, and his presence in Soulcalibur IV was revealed in the trailer on June 6.

Like the other Star Wars characters, he can utilize the power of the Force to gain the upper hand in battle.

What lies in his soul is Destiny.

The Apprentice appears as a fair-skinned man with dark shaved hair and brown eyes. His attire is that of his light training gear from the first game. As such, he appears wearing a tattered combat uniform featuring many bands of fabric tightly wrapped around his limbs and fingerless gloves.

He was raised in secret as the apprentice of Darth Vader, Dark Lord of the Sith. His father was a Jedi Knight, so the Apprentice possessed immeasurable potential. Darth Vader saw his natural aptitude and raised him as his apprentice. The harsh training prompted fear and hatred. He became the Dark Lord’s shadow, performing secret missions at his behest.

Upon completion of another mission, the Apprentice was given a new order. A gate to another dimension was about to open in space. He was ordered to act as a vanguard and identify the wave of power that was causing the disturbance.

Upon reaching the area of space in question and confirming the dimensional tear, the Apprentice wanted to see if the tear was a stable passageway. The wave of power grew stronger right before his eyes, and the distortion widened until it became a clear distinguishable hole in space.

When the dimensional portal opened, the Apprentice entered without hesitation. There, in that other galaxy, he encounters two swords that possess opposing powers.

The Apprentice strikes down Algol and returns to Darth Vader without Soul Edge or Soul Calibur, having deemed both swords to be of no value. Angered by his Apprentice's arrogance in making that judgment for himself, Vader Force-chokes him, prompting the Apprentice to reach for his lightsaber. Sensing this act of defiance, Vader releases him, and they both draw their lightsabers to duel. The text-only epilogue then says How he lived and where he traveled from there, is a story for another day.

Dark Force Attack: The Apprentice blasts the opponent into the air, pulls a few fancy slashes, bounces them off of the ground and finishes them off with a powerful shockwave move known as Force Repulse.

Against Yoda, due to his small stature, he levitates in the air, charges his power, and then blasts Yoda with Force Lightning.

Before performing his Critical Finish against most opponents, he will say "You're in my way." Against Darth Vader, however, he says "This will end it."

The Apprentice is a mix between Darth Vader and Yoda. He is almost as fast as Yoda but aggressive as Darth Vader. Using the lightsaber fighting style of Sith Shien, the Apprentice uses the Force in many of his very damaging combos. His Force Lightning is one of the worst unblockable attacks in the game as it takes up a long time to charge up (long enough for him to say "give up" in Japanese), uses up half of the Force bar and does not deal that much damage. The Apprentice is also capable of using Force Levitation to decimate his opponents in mid-air. Force Levitation can be activated manually or after performing the Star Divide or Force Blast, the latter being a Force-consuming guard break attack. He is best played as an aggressive fighter who does not give his opponent any time to recover. He is considered by the tournament community as a mid tier character.

Duel of the Fates 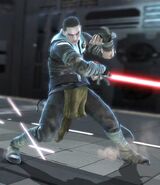 Hilde vs. the Apprentice 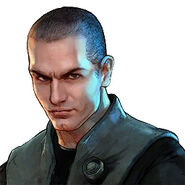