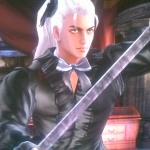 (In no particular order)

What I think of the games

Soul Edge- Super basic, but fun and revolutionary for a fighting game of its time

Soulcalibur- Freaking fantastic, everyone should play it

Soulcalibur II- Hands down the best game in the series, if only it had character creation

Soulcalibur V- It was like playing a bad fanfiction, waste of money, character creation was pretty good but lacks clothing options that are worth wearing without DLC

Retrieved from "https://soulcalibur.fandom.com/wiki/User:KieranKodona?oldid=135426"
Community content is available under CC-BY-SA unless otherwise noted.