Father: missing after one of his travels
Mother: taken by sickness

"We have many fine items!"
— Valeria

Valeria (ヴァレリア, Vareria?) is a fictional character in Namco's Soul series of fighting games. She is the shopkeeper along with Hualin and Lynette created for the Shop within Soulcalibur III, and an unlockable Bonus Character in the main game as well. She represents the "Grieve Edge" Create-a-Fighter discipline.

What lies in her soul is Dedication.

Valeria is the daughter of an antiques appraiser. Since her mother died of illness, her father was always outside traveling around the world, leaving her at the care of an old friend of his named Cepheus. Valeria grew up resenting him, and eventually nurtured a genuine interest in the same job as him. Cepheus gave her the job trying to make Valeria understand her father, but he believed her choice was her desire to beat him in his own game.

Cepheus urged Valeria's father to stay in town and spend time with her, but he claimed that that was the only life he knew and could provide for her. After hearing Valeria's choice of work, he thought maybe she would go with him someday. After that, he went to the west to assist in an auction selling a pair of mysterious swords known as "Soul Edge", and never returned.

Cepheus knew he was not the type of man to disappear for nothing, and when he heard Nightmare's rampage and his relation with Soul Edge, he understood the man's disappearance and told Valeria all he knew. Now a grown woman, she understood her father's true desires and wept for him.

She still wants to become the best item appraiser in the world, and continues taking care of Cepheus' shop as one of his three shopkeepers.

Valeria has no stages of her own, but she appears on Tales of Souls mode as a "Prepare to Defend Yourself" challenge in the Lakeside Coliseum (caged version) among the other shopkeepers as the first opponent of a 3-character Team Battle.

Valeria's icon from the character selection screen in Soulcalibur III 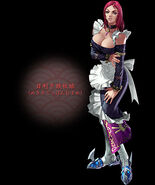 Retrieved from "https://soulcalibur.fandom.com/wiki/Valeria?oldid=180458"
Community content is available under CC-BY-SA unless otherwise noted.