Vercci (ベルチー Beruchii) is an Italian weapons merchant, known as the "Merchant of Death" (死の商人 Shi no Shounin) due to his business with the Spanish Armada. Vercci desired Soul Edge to form part of his collection of rare weapons, and Voldo stood as the head of the expeditions in his search, even contracting the services of the feared Spanish Captain Cervantes de Leon, and later accompanied Vercci when he decided to take the search personally. When word came that the Italian Wars broke on Italy and that Vercci's possessions were the first targets, Vercci grew mad.

Vercci moved his fleet, his only remaining possession, on an uninhabited island off the coast of in the Mediterranean Sea and dug a 50-mt deep shaft that would serve as his tomb and vault. Voldo would later be instructed to slay the sailors that helped in the construction to avoid the location of Vercci's "Money Pit" to be revealed, then later shut himself with his deceased master.

Vercci's ghost in Voldo's ending
Add a photo to this gallery 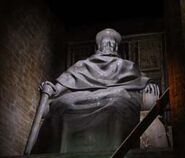 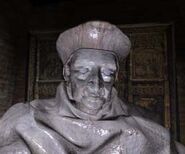 A close-up of Vercci's statue

Vercci, alongside a de-aged Voldo
Add a photo to this gallery
Retrieved from "https://soulcalibur.fandom.com/wiki/Vercci?oldid=172920"
Community content is available under CC-BY-SA unless otherwise noted.